I saw this on the Facebook the other day.  It makes me think that Guelph is the city of brotherly love.

I love that one brewery in this city calls the other their big brother, and that the big brother helped the nano-brewery in their time of need. I celebrated with this.

Wellington Imperial Russian Stout – a harmonious combination of stout and Russian [served in a Muskoka brewery glass because i’m sure they would like to join the family].

Hey little brother-in-spain … need me to mill some grain for you?

Also, I forgot that it snowed on my blog in December. Awesome!

This a blog post about logos – specifically the great logos in Guelph. My apologies to all the hermeneutics and theology readers that regularly pad my blog stats – but this is not a  post about “the word” – believe me you don’t want that from a man with half a theology degree – which I’ve.

Recently i read a beer blog post about great beer logos and Wellington Brewery came out as one of the top in Ontario.  It started me thinking … what are my best logos in the city of Guelph.  Here are my top 5 from breweries and restaurants / pubs.

39 Carden Street. I love the Partridge Family retro feel of this simple unidentifiable bird that might be a mallard

Stone Hammer – my daughter M loves their dark ale. I love that it looks like Thor might be the brewmaster.

Royal City Brewing Co. Yes, I wish they had used the purple and gold of the Rogie Vachon LA Kings, but silver and black are also wicked cool.

[anyone else over the age of 12 laughing that i just published the words number 2?]

Wellington Brewery. My brother-in-spain wears his Welly t-shirt fishing in the Mediterranean. For my $$ the Arkell Best Bitter is the best drink in the province.

Baker Street Station. Simple and awesome. Well done creative logo people – i always think i’m getting onto The Tube and end up with a beer!

Agree or disagree?  I don’t really care to hear from you unless you agree – but the comment section is open for business.

I was enjoying a Wellington SPA on the patio at the Wooly with my good friend R.  “There’s a fly, or wasp, in your pint” I commented.  “That’s the least of my concerns” was his reply. And he proceeded to keep the not-so-little insect in his drink. 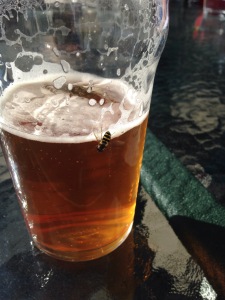 “What a good attitude”, i thought to myself. Why squabble over something as innocuous as an insect that just wants some slightly hoppy pale ale today. We can certainly coexist. This little bee is certainly not ruining my day in any respect – maybe we can just get along.  R gets his pint and the wasp gets his fermented sugar.

A couple of days later i found myself in 20 degree weather sitting on the OX patio. There wasn’t much space but 4 women were very nice and allowed me to share their table. I assured them that i was there to read and have a pint and wouldn’t bother them. They allowed me to coexist in their space in that little oasis in downtown Guelph. That’s when this happened.

Yes, a black fly in my “chardonnay” [Alannis], or rather Royal City dry hopped IPA.  My first instinct was to remove the little pest.  Then i remember the kindness of others. My friend R allowing the wasp to stay, my new writer friends allowing me to sit with them in the sunshine.  Monsieur la mouche [french] wasn’t really bothering anyone. Earlier in the week my daughter M and i had the “killing one fly doesn’t change the world for the better so why not let him live” conversation. So i let him coexist.  If i’ve learned anything from M, R, and my new patio friends at OX, it’s that maybe we can all get along and that makes for a better world.

Maybe you find that a little uncomfortable to think about drinking a pint with a fly in it – but i decided to coexist and it felt good.  Try it yourself sometime this week.

PS – i realize that it looks like i was writing about coexisting and friends and learning stuff from my daughter, but i did recommend two excellent patio beer that you might want to try. See what i did there?

Nano is small. Really small. But don’t underestimate the power of nano – especially when it’s in your back yard. Royal City Brewery is a nano-brewery [that means tiny] right here in Guelph. They opened up on Saturday with sample tastings, a tour, and sales. 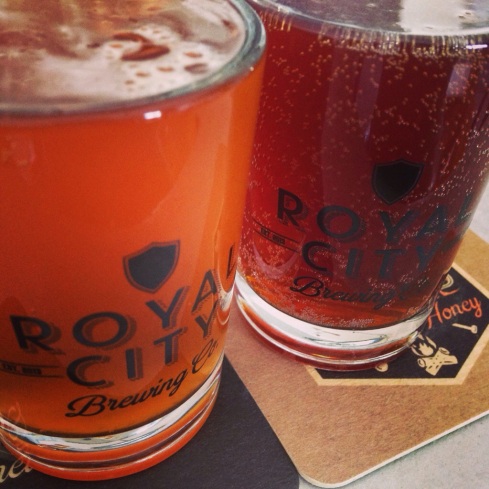 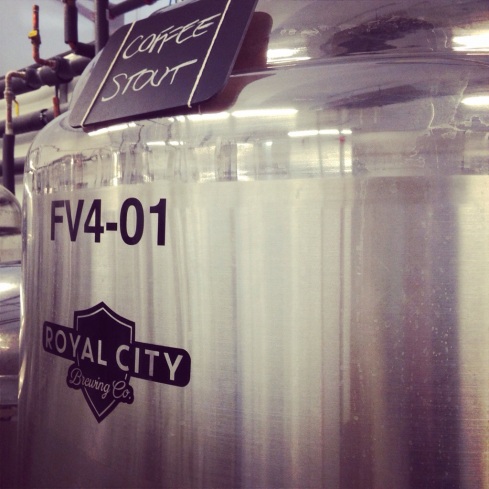 And they sold me a Growler of Gateway IPA

The best thing about buying a growler [2 litres] of IPA is that you bring it back and then they refill it for you.  199 Victoria Rd S – GO NOW!